Although it’s not known to science, the core reason we have two hemispheres in the brain is that in order to optimize our interactions, both of them need to process our ongoing interactions in two different ways.

As per the Dichotomized Operating System model 1:

To understand how our mind works, we must understand how they work as a single system, which can best be done using the “Car Treasure Hunt” analogy, as follows.

A father and his son are participating in the game of “Car Treasure Hunt” with the son at the driving seat. Car treasure hunt is a game where each person or team attempts to be the first in reaching a destination using a trail of clues while travelling in their car.

The son is good at thinking logically and executing efficiently, as he is young and physically fit. He avoids cars, people crossing roads, etc. and follows traffic lights, diversions, etc. on his own, but consults his old father, who is not as physically capable and is not as strong in logical processing as his son, but possesses wisdom derived from decades of experience of city roads, locations, their histories, features, dangers, shortcuts, etc., which he uses to decode clues given in the game for different destinations to guide his son on which path to take.

In the analogy, the father is system 2, which is what we call “the self”, and the son is system 1, which is our unconscious mind 3.

As avoiding other cars, people crossing roads, etc. and following traffic lights, diversions, etc. are based on preset instructions, the son does not need to consult his father on how to deal with them and executes them on his own. In the same way, system 1 executes repetitive, condition based, hard-wired, etc. tasks, which are preset tasks, on its own, which corresponds to unconscious processing in the brain.

In the process of making a decision…

In the process of executing the finalized decision, i.e. intention…

System 1 & 2 and their relation to our fundamental mind phenomena:

System 1 is the unconscious mind.

Thoughts are communication within and between system 1 and system 2.

Decisions result out of system 2’s processing with system 1 and/or itself.

Judgments are decisions finalized by system 2.

Intentions are action plans based on system 2’s finalized decisions.

Attention is about the topic that is being processed by system 2.

To verify the above points, all you need to do is to compare them with your subjective experiences. You do not need a science lab for that.

1 Dichotomized Operating System Model (DOS Model) is a functional model developed by me which reveals a single system consisting of hierarchically interconnected goal-driven mechanisms and processes running in the brain that work together and form what we collectively call “mind”, including how the “self”, which has no physical dimensions, is not visible and does not weigh anything controls our thoughts, decisions, actions, attention, behaviour, personality, etc. and is responsible for our existence.

It brings upon a new paradigm in mind and brain sciences based on the “systems thinking” approach.

2 For those who have read or are familiar with the book “Thinking Fast and Slow” by the Noble Laureate Daniel Kahneman:

1) Although Kahneman has stated in his book that he has used the terms system 1 and system 2 as metaphors to make it easy to explain the decision making process in the brain, the DOS model not only explains the presence of such systems, but how they work together and form our mind.

2) Kahneman’s explanations are based on ideas and observations, whereas DOS model is based on fully causal explanations stemming out of the process of natural selection.

4) In this short video, Daniel Kahneman talks about system 1 and system 2.

3 The degree of consciousness, i.e. the state of being subconscious, is when an interaction is distributed between system 1 and system 2. Its degree is based on distribution between them. The more it is processed by system 2, the higher the level of its consciousness.

The driving force responsible for our existence

Following is a brief introduction to the dynamic optimizing aspect of survival and reproduction characteristics based on the process of natural selection. It is the driving force behind mechanisms and processes running in the brain that are responsible for our existence and drive our daily lives.

It is based on the process of natural selection proposed by Charles Darwin in the year 1859 in his book ‘On the Origins of Species – By Means of Natural Selection’.

It explains how all organisms have characteristics with intrinsic tendencies to survive, reproduce and dynamically optimize their operations in a step-by-step manner. All human behaviour is based on such characteristics.

Following is the step-by-step explanation of the process of natural selection.

When organisms reproduce themselves, they pass on their biological characteristics to the next generations genetically.

As they are biologically reproduced, their next generations may not always inherit the exact copies of themselves.

There is a possibility of their next generations reproducing slightly different variations (i.e. mutations) of characteristics.

It is possible for some biologically reproduced organisms to inherit random variations of the characteristics that are helpful for them to survive in their environment, while others are not.

In the same way, it is possible for some reproduced organisms to inherit random variations of the characteristics that are helpful for their reproduction, while others are not.

At the same time, every passing generation reproduces slightly different variations of the inherited characteristic XYZ.

In the same way, with every passing generation, more and more characteristics favouring survival and reproduction keep adding themselves to the organisms simultaneously, while getting optimized in the process.

Such continually increasing amount of continuously optimizing characteristics favouring survival and reproduction results into increase in their overall population.

Limited amount of available resources in the environment to support such ever-increasing population results into organisms competing for survival.

Over the generations, organisms having superior variations of multiple and optimized survival characteristics outnumber their inferior counterparts in the competition for survival, eventually making them extinct.

Even with slow progression offered by small incremental changes from generation to generation, when such processes keep happening for hundreds of millions of years (as proven by 570 million of years of fossil record), the overall population of organisms result into possessing a very high number of characteristics that favour survival and reproduction, which Darwin cited as chosen by natural selection.

For the same reasons, all organisms have characteristics with intrinsic tendencies to:

3. Dynamically optimize their operations (based on their environments and conditions)

The mechanism of natural selection works on the premise that nature selects organisms for survival based on their inheritance of characteristics that allow them to survive and reproduce better than other organisms of their species that do not have such characteristics.

Such addition and optimization has been responsible not only for physical development of the body, but also mental development in a highly optimized manner, as it has the same physical basis and is a part of the same goal-driven activity. 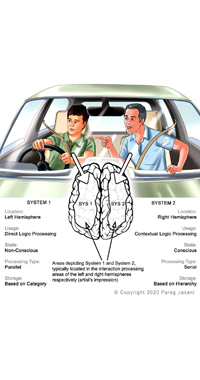 Introduction
Is this blog for everyone?
Optimizing Aspect of Natural Selection
About Me